« Every man under my command, owes me, one hundred Nazi scalps.
And I want my scalps.”… 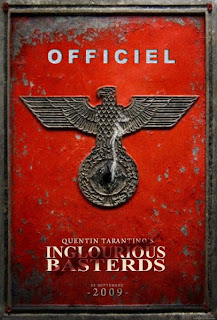 Trailers for “Transformers 2,” “Angels and Demons” and “G.I. Joe,” along with spots for SoBe and Pedigree, topped the list of most popular Super Bowl commercials watched online, according to a viral video tracking report issued today by BayTSP.

BayTSP tracked propagation and viewership of more than 50 commercials aired during Super Bowl XLIII across more than a dozen video hosting sites, including YouTube, Daily Motion and YouKu. Viral video tracking and measurement is part of BayTSP’s larger business intelligence service used by the entertainment industry to analyze consumer interest in feature films and television shows.

“Viral video propagation and viewership is an increasingly reliable barometer for judging consumer interest,” said BayTSP CEO Mark Ishikawa. “The majority of Super Bowl ads were uploaded by fans to YouTube, but for this project we monitored video hosting sites worldwide.”

“The entertainment industry uses BayTSP’s business intelligence services to identify where consumers are posting their content online, what content is most popular and how many people are viewing it,” Ishikawa said. “Coupled with BayTSP’s enforcement services, content owners can more effectively target and control their online promotions. All of this is key to negotiating and enforcing revenue sharing agreements with content distributors and monitoring the effectiveness of online advertising and marketing campaigns.”